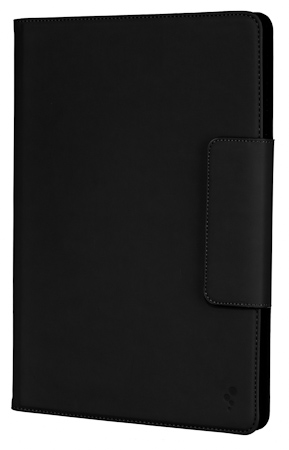 Type comfortably with a removable Bluetooth™ Keyboard and stand the device at any angle with GripTrack™ technology. The Universal Stealth Pro Keyboard Case for 10 inch devices is all that, in a super slim package.

I have a lot to say about this product, the customer service and the company m edge itself. I purchased this case because it has a removable magnetic keyboard and you can fold the cover over and still use it as an iPad. The Product is great, very impressed with it. Hands down one of the best iPad covers and Bluetooth keyboards I have used. I paid $79 + tax which seem to be normal for a cover and Bluetooth keyboard. I was totally happy with it and never had a single problem. Than one day it stopped working with no explanation and it wouldn’t charge. BUT WAIT IT GETS BETTER. I only had it for 5 months and I needed it for nursing school. So I emailed the m edge customer service and received an immediate response. A representative by the name of Erin helped me and apologized for my inconvenience. Erin was very helpful and said they would take care of it. After proving my 5 months of ownership Erin sent out a replacement that was at my door in 2 days. I was very impressed with the professionalism, integrity of the company (M edge) and customer service assistance by Erin. Everyone was stand up and amazing but to make things better they support the military. I was thanked for my service (no it has nothing to do with the replacement) but I appreciate the smooth transaction, assistance from Erin and for recognizing our military. I will totally buy from them again and have no regrets in purchasing this product. In fact I’m highly impressed with this company and have the utmost respect for everyone involved. I would totally recommend this product and even though I was the one in a million who had a problem the company still made it right. That means more to me as they stand behind their product and take care of there’re customers. Thank you for your support and you Erin for your amazing customer service. Thank you Ken

The product looks nice and may work great with other tablets, but not the Samsung Galaxy Tab. The top left mounting strap interferes with the power button for the Galaxy. This creates a large issue when trying to operate your tablet, while still in the case. Lesson learned - Do not purchase this product if you have a Samsung Galaxy tablet.

This is a great buy, but it takes forever for it to connect to my tablet. It is paired with the tablet. I have a Samsung Galaxy 10.1 tablet. What can I do to get this thing working right. Thank you

Pads come off in less than a month

This portfolio style cover is a bit large for my iPad 5, even when housed in a Beetle Defense Case (great protective case for 1/2 the price of an Otterbox). That said, I'm very pleased with the case.. The keyboard works well, but would be even better with a track pad. Durability has been better than expected over the 3 months I've had it.. A quick wipe with a damp, lint-free cloth and it looks like new. Very professional appearance. Grip pad works well and the magnetic clasp can be wrapped over the top for even a steeper angled stand. A portrait mode would be nice. If it was slightly smaller with a track pad keyboard and portrait capability, I'd give it 6 stars. As it stands, it still deserves 4.5 stars.

I got this item on clearance at my local WalMart. I paid $50 for it, after taxes were applied. I am using it with my iPad Air (iPad 5). I have no issues at all with connecting/disconnecting - it worked flawlessly upon first connect and hasn't had a problem. It fits the iPad perfectly and doesn't interfere with any functionality whatsoever. Perhaps this product was geared more toward the iPad and later marketed as universal - a friend had the same problems with her Samsung device that are outlined in these reviews. I, on the other hand, am loving it! Luck me. Not sure about the life of the straps as I haven't been using it for more than a few weeks but I don't take it out and put it back in the case all the time - so that could be wearing the straps down for those of you having issues with them.

So far everything is working great with my purchase. The keyboard does light up, you have to use the FN and the lightbulb key for it to happen. There are a lot of good reviews on Amazon if you want to see what else helps.

This case/ keyboard work great I purchased it for use with my Galaxy note 10.1 and have had no problems yet with it near the power button. So I don't know why someone would be telling people not to use it with a Galaxy tab. I also read some of the other reviews saying they were having issues with the keyboard disconnecting on them. I had this issues as well but when I read the instruction manual I found out that you need to hold down the Fn key and then press either Q (IOS), W(Andriod) or E(Windows) depending which operating system your tablet is running on. This solved that issue for me. I am using the keyboard to write this review with no disconnection or issues. I am happy with this product and recommend it for those looking for a tablet case/keyboard.

Design is good, but keeps disconnecting

The keyboard,keeps disconnecting every 1 mins on idle. Tried on my galaxy note 10.1 and moto x . Had issue in both.. so its seems to be a keyboard issue itself.

Just bought this for a Nokia 2520 tablet and it fits perfectly. Had no problem pairing the keyboard. Nice quality leather folio and the keyboard is solid. Wife was able to use it easily during her bus commute on her lap. Would highly recommend it.

Love it, every thing work great except the keyboard doesn't light up. Took it back to the store and they said they had never seen one light up, except when turning it on. Is this a keyboard issue. If it would light up I would give this a 5.0

I have an iPad mini 3. And I absolutely love my keyboard. There's no other keyboard I would recommend. Very very flexible when it comes to adjusting your screen, very professional look. No cons whatsoever ever. Easily paired to my device and battery like is amazing.

Was this review helpful? Helpful Not helpful

No reviews yet. Be the first to write one!